Recently my wife and I’ve travelled to Vegas. It was a week trip, we stayed in Las Vegas for five days with an additional day booking and in Grand Canyon for two days.

After booking flight and rental car the next point where majority of the budget is spent is for the stay. Since it’s one of the main tourist location and costs per night at hotels of all ranges were considerably high. Especially in Las Vegas, hotels near strip were approximately $85-$130 per night even in an average hotels.

This is price as of today in other Hotels, It was more when I visited last month.

When it comes to hotel, we have very little control over the room that we’re going to stay and the reviews might not help sometimes as the review will be in general for the particular hotel in that location. For example Holiday Inn or Westin or Sheraton in a particular location has got 4.1 star review, there might be hundred rooms in that hotel and there are possibilities we might end up in a room that got one star.

When I made my flight ticket purchase through Expedia, I’ve also made hotel booking as Expedia listed a 15% discount or some discount. After I made my hotel reservation, I felt that we’ve spent more on the stay, that’s when I thought about Airbnb. I’ve already used Airbnb to stay in two different states. Once in Virginia and other time in New Hampshire. I’ve also promoted Airbnb in my blog when it was newly launched in India few years back.

I wondered why didn’t I thought about it at first and I went on to find a best home to stay in Vegas. It didn’t take me more than 15 mins to find a fantastic place which was very close to Vegas strip (the road with Casinos on both sides). And the best part was the price! I got a home for $25/night and the host had a great review and was a “super host”, a term in Airbnb for the hosts who has more 5 star reviews from the guests. I was super happy to see that and immediately made my booking with them for my day 1 and then again at the same home from day 4-day7.

I even booked an additional day with them as my flight back to New Jersey was very late at night. Since the checkout time was 11 AM and my flight was 11:50 PM, I didn’t want to keep my wife somewhere in vestibule the whole day till late night flight in that hot weather. So on whole I booked this home for 6 days (1+5) and my price was $177.77 with tax! It could have been even less if I’d a continues 6 days stay, as there was a break in my stay in Vegas, I’d to pay few breakage in both bills separately. This could have been easily $550-$580 with tax if I’d gone for even the lowest price hotel.

It was a villa with two rooms listed for guests. The host was at the ground floor and we’d our room upstairs. Quiet and cozy. Absolutely felt like Home away from Home! I went through the photos of the house before making the booking and went through the reviews, as the review here is particularly for the room that we’re going to stay. That’s the difference in reviews between hotel rooms and for the home listed in Airbnb.

And that’s how I saved $400 in my 6 days stay at Las Vegas! You can definitely save a good price if your destination is a prime spot or if you’re planning for different number of days. If you haven’t tried Airbnb yet, get a $40 for your first booking when you make a trip for more than $75. Visit this link and create an account www.airbnb.com/c/bkesavan

Do send this link to your friend who is planning for a trip! 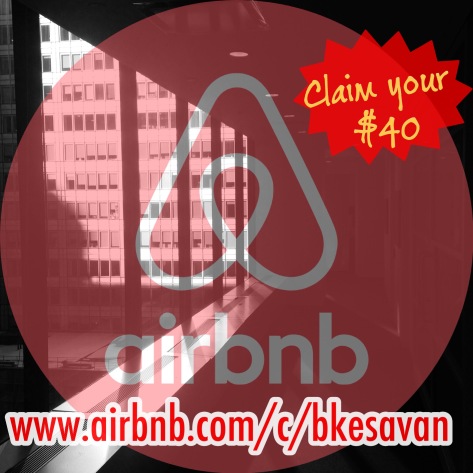 Signup using the following link www.airbnb.com/c/bkesavan or click on the above image to get $40 discount!

I have seen photos of Manhattanhange (without knowing the name then!) several years ago. I was not aware of such event until last year when I discovered something like this happens twice a year. One in May & another during July. The dates are May 29 & July 12, also a day before the above dates as well.

When I was reading newspaper last year (2015) I saw the Sunset photo and the news referred it as Manhattanhenge, I then googled about it & got to know I’d just missed it by two days or so. The disappointment level will be very high when you realize you could have witnessed something that happens in the very street you walk every single day & it’s historic which happens just twice a year.

Immediately I checked the dates for 2016  Manhattanhenge, it was May 28, 29 & July 11, 12. After a year, on May 29th I’d visited New York to see this, unfortunately everyone was disappointed as it was cloudy! The crowd waited until the sunset but it happened behind the clouds! May be the sun was shy to look everyone as hundreds of people were looking at it at the same time after an year!

The last time of the year to witness this came! I totally forgot about it on 11th, on 12th I remembered it after I boarded bus to New Jersey! I couldn’t stop bus as they won’t stop it once it’s started from departure until the first stop arrives. I waited until the first stop & crossed the road & waited for the next bus to New York.

Arrived at Times Square at 7:50, the streets were already crowded. Both sides of road were crowded and none crossed the road for the walk sign! Some taxi’s lowered the window and asked what are people looking at? Some people got down from Taxis after knowing about it. Cops were on the fly & ensured people are not blocking the traffic, as center of the road is best spot to see.

Everyday there is sunrise and sunset, but how many days are we looking at it? When was the last time you saw the sunrise & sunset by standing in a position just to look at it? But there is a point here, it’s not just a sunset, it’s a sunset that aligns in center of the street. Just like the Stonehenge in England which was constructed somewhere around 3000 BC to 2000 BC.

At 8:10, like the curtain opens before play, Sun came out with glittering rays from behind the building it was hiding. It was so beautiful to see the Golden sun surrounded with reddish ring and orange and golden glittering rays! At this evening, Nature was the celebrity! People shouted out of happiness and I kept smiling 🙂 It was the moment everyone was so happy and some even clapped for the nature 🙂 I asked someone to take a picture of me instead of just taking a selfie, what’s the use of having hundreds of people when we don’t talk to them.

People kept looking at the spot for a while even after the sun was set. More than hundreds including may not get another chance to see it next year or in future! Next time when you’re in New York City around May or July, do not miss this! It’s for this 10 minutes I waited an year!

Checkout the video below!