Ever since I heard this term ‘Cherry blossom’, I was wondering what it is and why is it so famous. My friend Ananth had just told me that we’re going to Washington, D.C. and I never asked a question what’s the plan there as my goal is to just go out somewhere. Just when I was about to start from office I got a call at my desk and picked it out of courtesy and that made me work for half an hour more 😀 and I came to know that the person who was working with me had also planned for Cherry blossom festival.

Cherry blossom is when the tree blossoms with its flowers all at same day. It usually happens at the first week of spring season. I had then checked in Google images to see what and how does this looks. (Wait! Don’t rush to google images now:D You will see the pics later in this post). My friend Vignesh said in our whatsapp group that these trees were givento united states by Japan in 1912 and it is planted in a place called Tidal Basin in Washington, D.C.

I’d started from office at 5:45 PM and rushed to NY Penn station to catch a train to Edison. On my way to train and while traveling in train I could hear washington, cherry blossom, weekend plan etc… from several people. I had assumed that whole New York, New Jersey and other states near by D.C. is going to be in D.C. that weekend.

Ananth came to Edison station to pick me and we went to a Subzi Mandi (Indian dept store) to buy frozen chappathis for dinner and some snacks for the weekend trip. I’d bought an additional Burborn biscuit as an evening snacks until I reach home, but I was not allowed to have it in car as he’d just washed car to resale it 😦 I thought to myself yes, I can control my hunger for few more mins as there are lot many people in the world who doesn’t even have food to eat.

However I’d finished the biscuit packet as soon as I reached home 😛 Spent some time talking to my friend and watched a Tamil movie Rajathanthiram at night, it was good. I’d asked about the time we’d to start from home and slept nicely. Everyone got ready and we’d waited for Ananth’s friend to come as he had rented a car for our trip. In U.S, people generally rent cars for long trip. We can add drivers to the rented car, meaning, whoever has planned to drive car during the trip has to include their name to the record with their valid license as proof.

We’d started from home at 11:00 AM, Ananth’s friend Varadan drove the car. We headed to car rental office at Philadelphia which is on our way to D.C. as we were not able to add drivers online. As my friends were waiting in a small queue to add their names to the trip, I’d used the rest room in the rental car office. The reason I’d mentioned about the rest room is that in U.S rest room in almost all places will be maintained very neatly. Doesn’t make me hold my breath until I come out of the restroom like how I do in India. It must be followed like this in India at-least in private places.

After adding the drivers to the rental car, we’d started form there at 12’o clock. Oh! Wait… this is what I said when we started, but it was 1’o clock 😀 as we didn’t had aux cable and since the car system couldn’t read my HDD, I’d lent movie DVDs from Redbox machine. Redbox is a ATM kind of machine that will usually be placed in places like walmart and other stores. We stopped car at ‘Seven Eleven’ shop and I’d rented Horrible Bosses 2 and The Avengers and bought an aux cable to play songs from mobile.

Ok, now all set for D.C. Ananth started driving from Philly to D.C. As we hit the highway, we could see a lot and lot of cars heading towards D.C, Ganesh checked parking in D.C. online and parking were full. Yeah, we can book parking online in U.S. I’m not sure if this is available in India. After 2.5 hours we then entered D.C. and then on it was slow moving traffic.

Finally we’d reached our destination at 16:10 and those beautiful trees were seen everywhere. As soon as we got down from the car we started moving towards the trees and looked at the beautiful flowers. Trees full of white flowers. After looking at google images I was hoping for pink flowers but it was all white flowers. We slowly walked and started taking pics and spent an hour near Washington Channel. 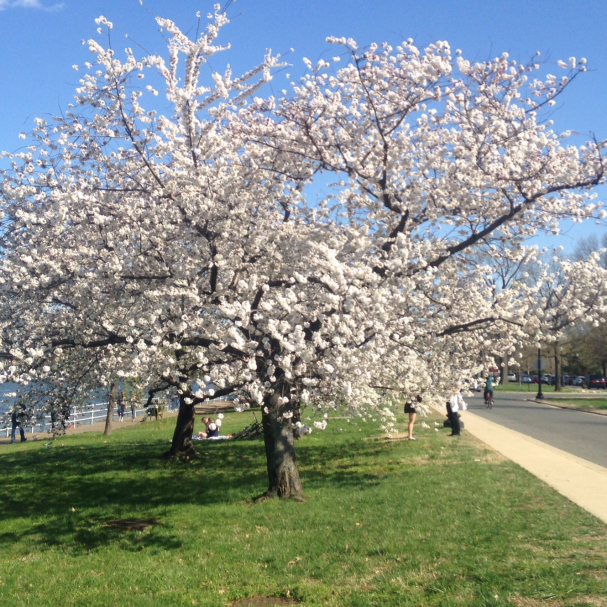 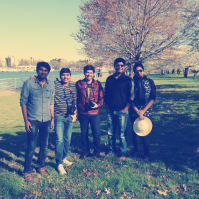 The spot was very scenic. Water channel at one side and green grass and trees full of white flowers are other side. Wow! It was beautiful place. Some localities were walking/jogging with their dogs and tourists like us were having good time. We realized that was not the main place for the cherry blossom and started walking other side of the Channel. As we started walking I realized that we’re nearing the main place. Because I was able to see more people as we kept moving. 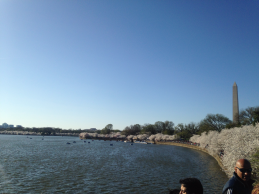 Cherry blossom trees throughout the lake

As I crossed the road near a lake, yes I’d confirmed to myself that it is the main place for this cherry blossom. We could see only peoples head. It was like Marina Beach, Chennai during Kaanum Pongal day. So many people… wow!!! I could see lot of Indians and Japanese. I heard more Tamil, Hindi and Telugu in the crowd. As we reached the lake we thought to have food and then enjoy the spot as we didn’t had lunch except for Ananth who had Dosai in car that was prepared by Varada and his wife. We then walked few meters and there were many carts. Most of the carts ran out of veggie food, what will I do now? I thought to myself. There was a cart that had falafel sandwich which was only option for Veggies like me. Sandwich here is not like how it is in India, it was like a roti and falafel is similar to masal vadai. Imagine how will you find it to have a food like this (masal vadai rolled in roti without any gravy) when you are hungry. But I didn’t feel bad then because I got at-least that to eat.

While waiting for food to arrive in the cart, when I’d asked water to my friend someone extended his hand turned a water bottle leftt and right which looked like a school kid saying ‘tata’ ‘bye bye’ to his parents. Just grabbed the bottle and drank the water. When I spoke with that person I came to know that he too is from India – Tamil nadu – and Cognizant 🙂 Talked to him about whereabouts and project he works on and said bye when our food arrived.

Sat down on the grass and had food with friends, now I made 4 more friends who were just Ananth’s friends before the trip. A trip is not just a trip always, it’s a good time to make new friends, After having food we spent sometime near the World War II memorial and then then moved near the lake and spent good time watching the scenery, taking pics. As the weather turned chill gradually when it started dark at the late evening, we moved ahead in search of rest room and Dhileep who had visited this place before said it’s in Jefferson Memorial. I don’t know why others visits this memorial, I’d visited that place at that evening for rest room 😀 😀 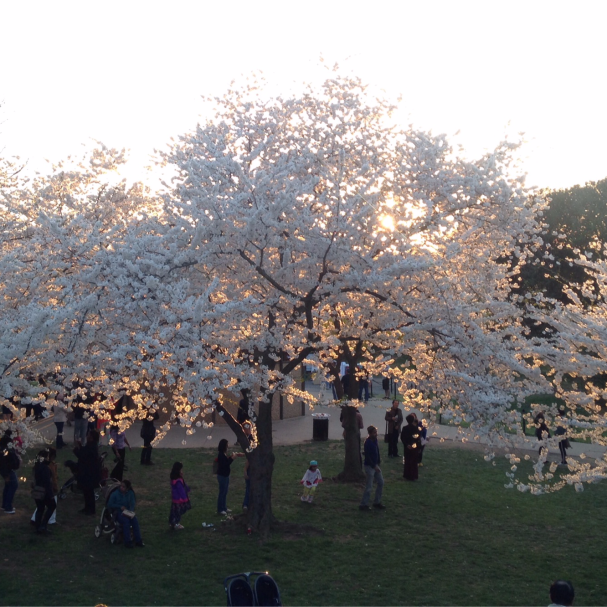 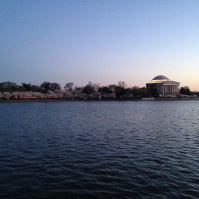 Jefferson Memorial view from other side of lake.

Passed a thousands of people in the lake walk way and reached the memorial and we ran left and right to search the rest room but it wasn’t there. OMG! Dhileep still believed it was there when he visited the previous time but now? After a few mins search we got to know that it’s in ground floor of the memorial and finally used it. It was the first worst rest room in U.S I’d visited till now. But for the busiest day that was exceptional. 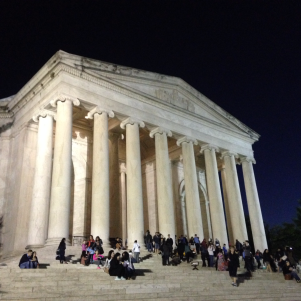 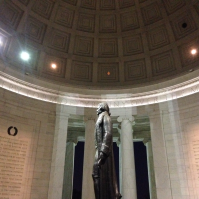 We then spent sometime in the stairs of the memorial and enjoyed the night view of the lake and place. We then headed to our car with little doubt whether our car will be toed or it’ll still be there as we’d parked in a ‘tennis court members only‘ parking 😀 and it was there 🙂 We then headed to the hotel in Virginia which Ganesh had booked for our night stay. As it was time for dinner and as we started from the place, I sat at front and Dhileep drove the car. I was saying route from Google maps, we’d decided to get food from Chipotle which is a Mexican restaurant in the U.S which has rice. So we stopped at Chipotle for dinner, got take away (parcel) and headed to our night stay, Quality Inn.